Note to Self: Guard the Cupboards!

Remember to be suspicious of a suddenly quiet two year old.  Unless you are sure he is napping, as there may be trouble in the works!

Mr. Four is loving his naps and his time in his new walker, so I have a free arm a bit more nowadays.  Earlier yesterday, I was having one of those "wow, I am getting lots done today" moments.  I had Mr. Two and Mr. Three help me clean out the fridge (they actually like this chore) and empty the dishwasher.  After a quick dash to pick up Mr. One from school (it was a half day), we were back to work.  I was finally making a dent in the piles that have accumulated around my house as a result of too much sewing and various Halloween activities.  I was feeling really good, so I decided to make homemade rolls and soup.  (Never mind that it is still about 90 degrees outside here still.  It is fall and I wanted to make soup!)

I had Mr. Three in the kitchen with me as I mixed up the bread seasoning for our cheesy rolls.  A spoonful of garlic powder, a dash of basil, a cup of Parmesan cheese...  I popped it in the fridge and left the rising dough on the kitchen counter to tackle the next project:  the laundry.

As I was folding and sorting away, with my little Mr.'s happily playing together, it got really quiet.  I should have been leery of this change in noise level.

After a while, I decided to check in on the boys.  Mr. One and Mr. Two were building Lego Heroes, Mr. Four was still dozing in his crib, and Mr. Three was happily playing in the kitchen.

Wait, Mr. Three is in the kitchen.
With a step stool.
In the spice cupboard.
And it smells kinda funny in there.  Sort of aromatic, and not in a good way...

Well, Mr. Three, being the curious and smart toddler that he is, decided to make his own spice blend in the kitchen.  I will share his recipe, just in case you want to pin it. 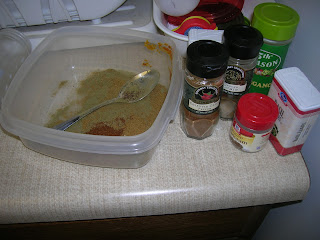 Mix with a clean spoon in a dirty Tupperware container, then sprinkle amongst the family's water cups and counter for good measure.

In all honesty, I was equal parts stunned, angry and amused, so I think he got off pretty lightly with a stern talking-to from a mommy who was stifling a laugh.

I called Mike to tell him about the mess, and to question why it is that our children only go for ruining the more expensive spices.  I declared that Mr. Three is a new kind of two year old.  The other boys didn't do things like this.

Then Mike reminded me of the time Mr. One dumped an entire bottle of powdered ginger in the living room rug.

And the time when I chased Mr. Two around the house, as he giggled and screamed with delight, while he poured a large bottle of baby powder all over the house.

Or the time that the boys decided to play in a newly opened bag of flour...

So this is not a new thing.  I thought I would be more savvy these types of antics by now.

It's a good thing Mr. Four can't reach the cupboards with the "fun stuff" in them.  Yet.
Posted by Diana at 8:46 AM 4 comments:

Labels: notes to self

Here are snapshots of our Halloween this year. 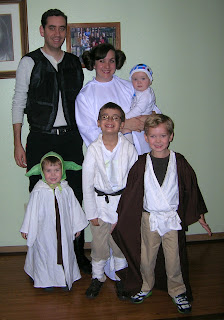 Mr. One and Mr. Two are very much obsessed with Star Wars right now.  I attempted to get them excited about a different theme this year, but Mr. One was adamant about wanting to be Luke Skywalker.  I was not too thrilled with this idea, especially considering that my children had not even seen the movies.  Then the idea started to grow on me.  I found several tutorials online and lots of images through Google image searches (thank you internet!), found lots of materials at thrift stores and on sale at fabric stores, and got really excited about the whole project.  After a few weeks of wading through yards of polyester and jersey knit sheets, we had a Star Wars family! 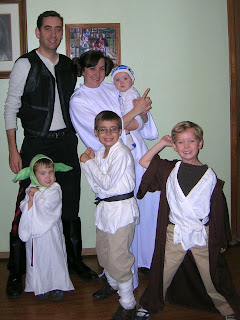 May the force be with you!  In case you couldn't tell, Mike is Han Solo, I am Princess Leia, Mr. One is Luke Skywalker, Mr. Two is Obi-Wan (Ben) Kenobi, Mr. Three is the cutest Yoda I've ever seen, and Mr. Four is R2-D2. 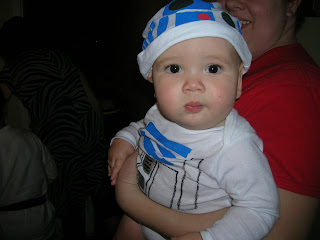 Here is another close up of R2.  Mike hand stenciled and painted his onsie and hat.  Oh yeah, I am super lucky to have a creative husband! 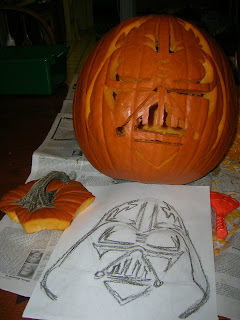 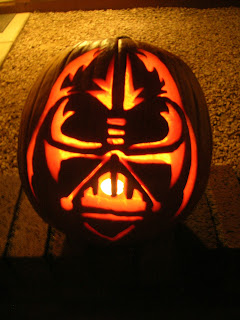 Darth Pumpkin was quite the scary site on Halloween.  Again, Mike is our talented pumpkin carver. He loves doing this each year, which is good, because I really dislike carving pumpkins, but the kids love it. 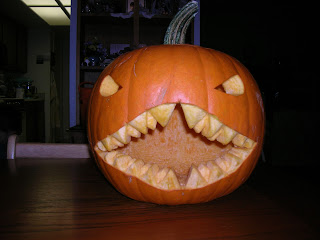 While I was at Time Out for Women this Saturday with my Mom, Aunt and sisters, they also worked on Sharkie and watched "It's the Great Pumpkin Charlie Brown".  Mike even roasted some sweet and savory pumpkin seeds.  Aren't the teeth so fantastic?! 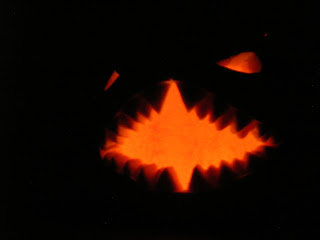 After all the women came back from Time Out, we watched Star Wars episode IV at my parent's house on their big flat screen TV with surround sound.  The boys were totally mesmerized and loved it all.  Mr. Three kept shouting out our names when the characters we dressed as came on screen.  Thank goodness he wasn't disappointed that Yoda didn't make it into the first movie.  Now I am going to hear about Star Wars non-stop for a while now...