Here's a little recap of our Valentine's Day.

I attempted to convince my two oldest boys to make Valentines this year, enticing them with clever cards I have collected (thank you Pinterest).

Mr. One was unconvinced that this was a good idea.  He had his heart set on Star Wars Lego Valentines, so off to Target we went.  He was all too excited to get started selecting and addressing them.  I didn't have to help him at all, he was so happy. 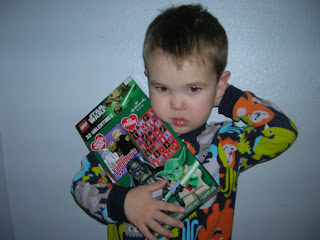 The only trouble with Mr. One's cards was that Mr. Three was really enamored with them.  He kept sneaking them out, clutching them to his little chest, pointing out all the characters.  He also tried to convince me they were for him, pointing out the letter in the beginning of his name on the box as some sort of marker that they were actually his.  I had to go and buy an extra box later so he could have some, too. 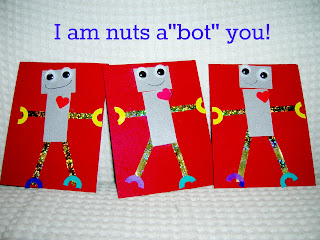 Mr. Two, my artsy little man, was eager to craft, and saw these robot cards and wanted to make them.  We changed it up a bit with supplies on hand (colored hole reinforcers halved for hands and feet, curling ribbon limbs and simplified bodies), but I think our version turned out quite cute.  I especially love the hand drawn smiles.  It was a lot of work, and we had to assemble them over several days (five year old boys don't have the longest of attention spans), but he was so excited to give them to his preschool friends.  After all that work, I was frankly happy Mr. One wanted to go the store-bought route!

I had grand ideas of making my own Star Wars-themed cards for my boys, but time ran out.  Love this.  I also found a funny poem (thanks Jenny!) "R4 is red, R2 is blue, if I were the force, I'd be with YOU!" I may try and do something and just surprise them with a love note later... 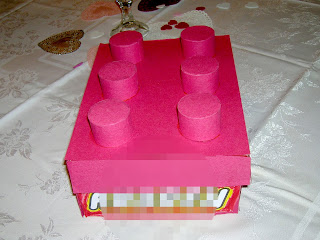 Mr. One also had to create a Valentine carrier to take to school, so we came up with a giant Lego brick box.  Mike measured and cut, and problem-solved to turn the idea into reality.  Mr. One glued and colored.  I even found a Lego font that he created his name with, and that was a really fun touch.  It was a team effort, and I think it turned out great.  He loved it. 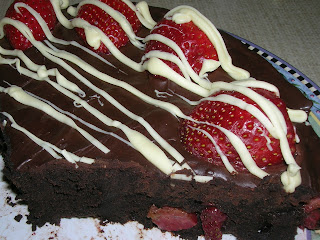 We did have our traditional "heart day" fancy dinner with the family.  I spread a real tablecloth and decorated with candlesticks, heart doilies and foam hearts, using the nice(r) dishes.  I made pizza nuggets, roughly shaped into a heart, red jello, salad, and an extra rich strawberry-studded chocolate torte (think giant chocolate strawberry cake pop).  We turned out the lights, played some "love"ly music, lit the candles and ate together.  It was so much fun, and my boys were so well behaved.  I think I may break out the fancy dinner items more often!  Anything to avoid the typical weird noises, wandering around the dining room with a forkful of food, and random silliness... 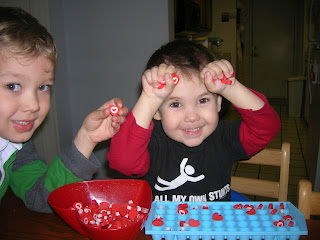 It was a good day for showing our family how much we love one another.  I will use any excuse for extra love at home.