Note to Self: For When I'm Older

I pray that when you are older, when your nest is empty, that you will remember the hard days.  The days of raising young boys and toddlers and babies.  The tired and busy days that accompany mothering the small ones.  So that when you go to Wal-Mart, and you see the stressed, pregnant mother, the one with two small boys in the cart that looks too heavy to push, that you smile and offer kindness.

Especially if the two-year-old is screaming and standing in the cart, throwing things out of the cart, tears streaming down his little chubby-cheeked face.  Remember that she is doing the best that she can.  That, though she is smiling and looks to be ignoring the distressed toddler, that may be the very thing that this two-year-old and his mother need.  You may not be aware of the stress of her day, that she is not even supposed to be picking up anything over 20 pounds (that includes toddlers), and that to stop and pick up her child not only worsens the screaming, but could put her unborn child at risk as well.  Realize that if she is still at the store with a crying babe, that she must really need to get those items in her cart.

Remember that half of the store has already given her dirty looks, shaken their heads.  That one shopper may have even offered praise to the four year old for behaving, only to turn and, in a nasty, passive-aggressive manner, let the mother know that she hopes the "other one" learns to control his temper and learn from his brother.  Remember, oh, how hard those days were.

Then I hope you choose to be another woman, the one who remembers.   I hope you turn and smile at that beautiful mother, the one who wears a smile to hide the embarrassment and worry, and be one of the ones who tell her, "I've been there, too!  Hang in there.  It gets better.  You're doing the most important work."  Offer to help her, talk sweetly to her children, wipe a tear-stained face.  Love her without judging her, because she needs that.  Remember, and smile, because you were there too.  And there were so many good moments before and after that hard, ugly one, that made mothering a joy.  The time to sit and read a story, the tucking in and kisses goodnight.  The "I love you's" and the laughter.  It is there too.  It's just so hard to see in the middle of Wal-Mart with a screaming child. 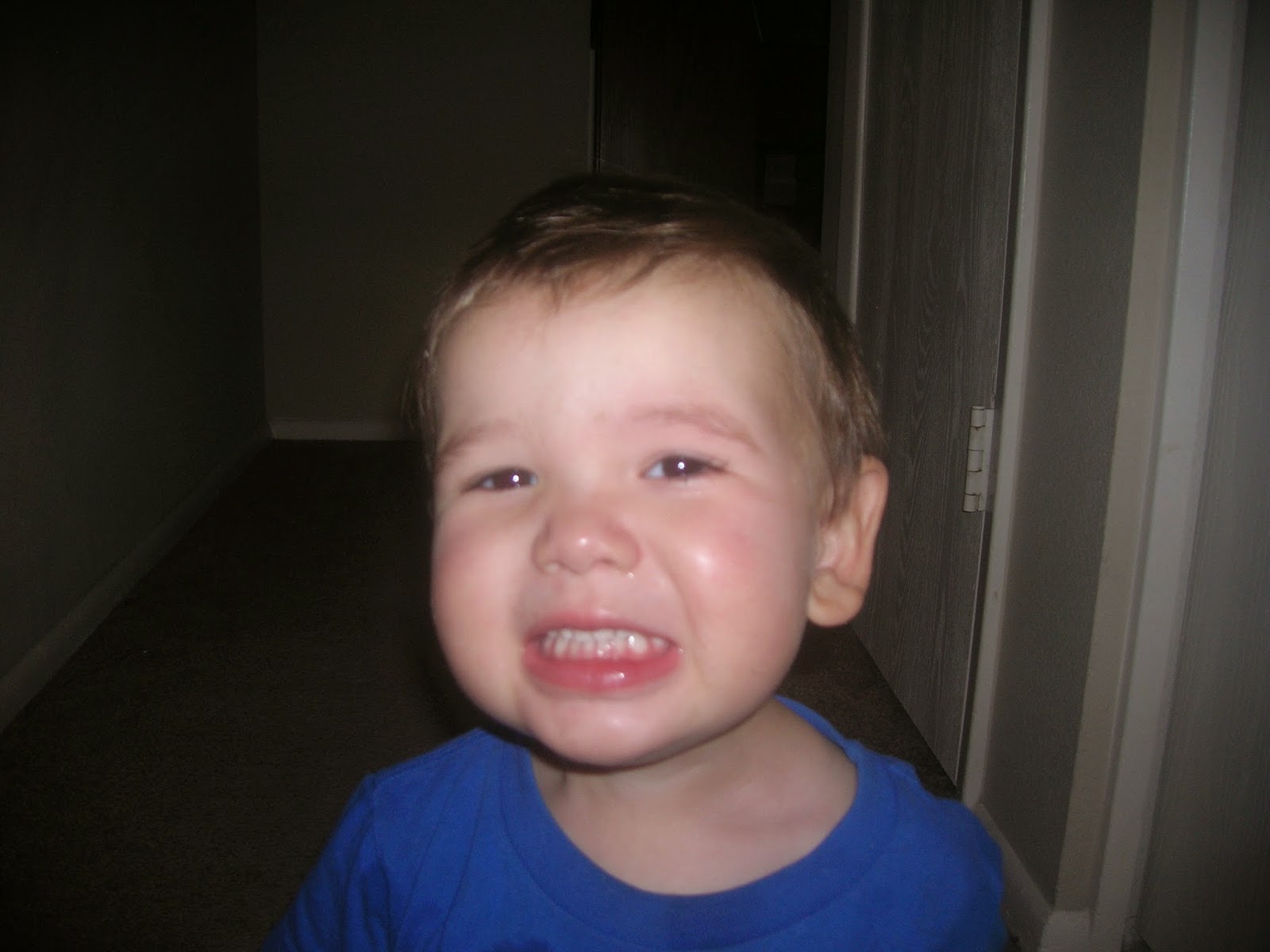 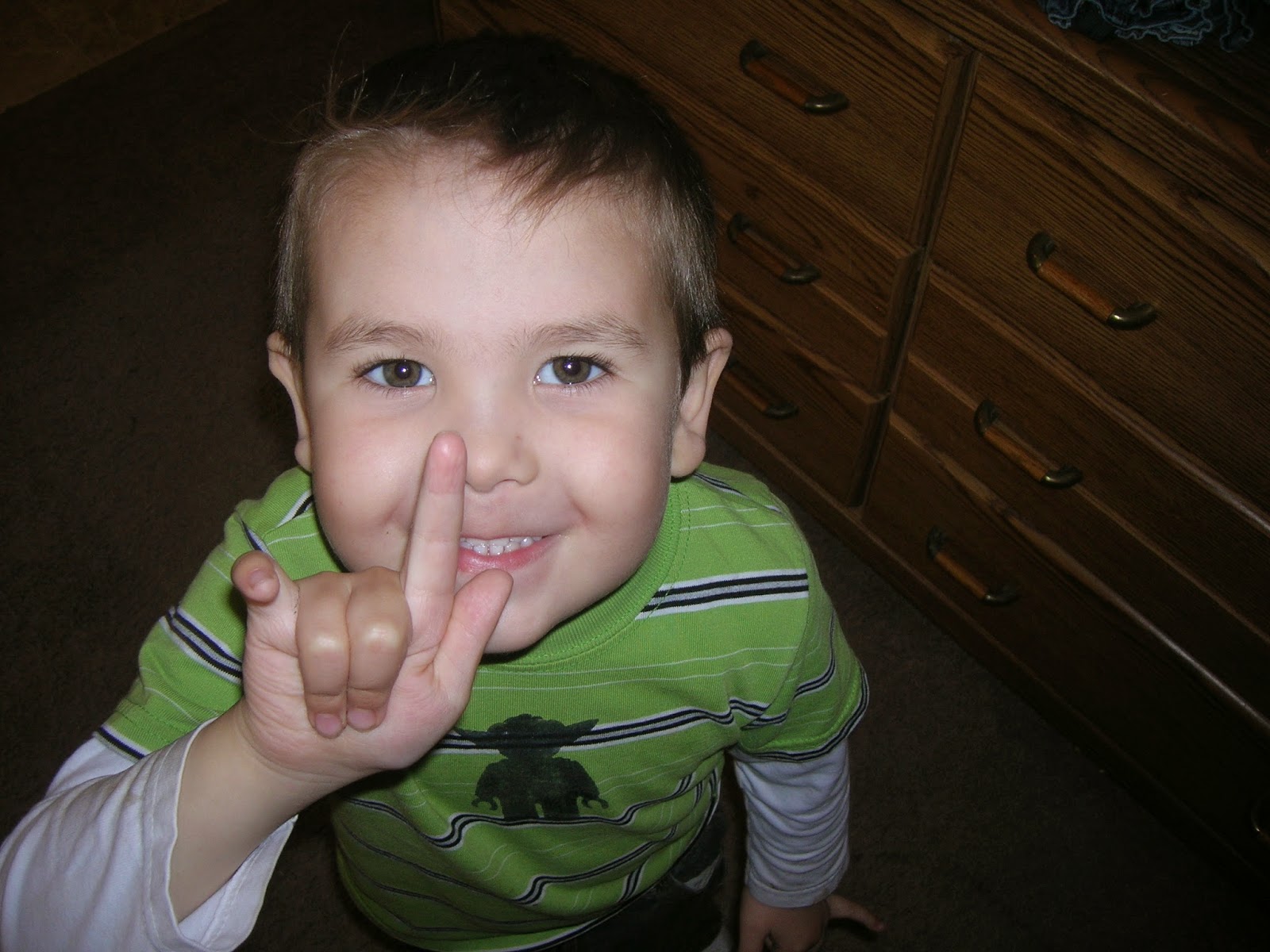 Labels: motherhood, notes to self

At the beginning of December, Mr. Two turned six.  How did he go from that cute curly haired baby to a kindergartener so quickly?

Here are his birthday requests:

Not too challenging of a list, except for the tiny detail: that it is quite difficult (thankfully not impossible) to find ocean themed party supplies in December...

After scouring too many stores to remember, looking for suitable offerings, I think we were able to pull off a fun, but not over the top party for my six year old cutie.

He loved opening gifts at Grammy and Grandpa's house after his hot dog dinner. The other Mr.'s were all too willing to help him build his golden Ninjago dragon. 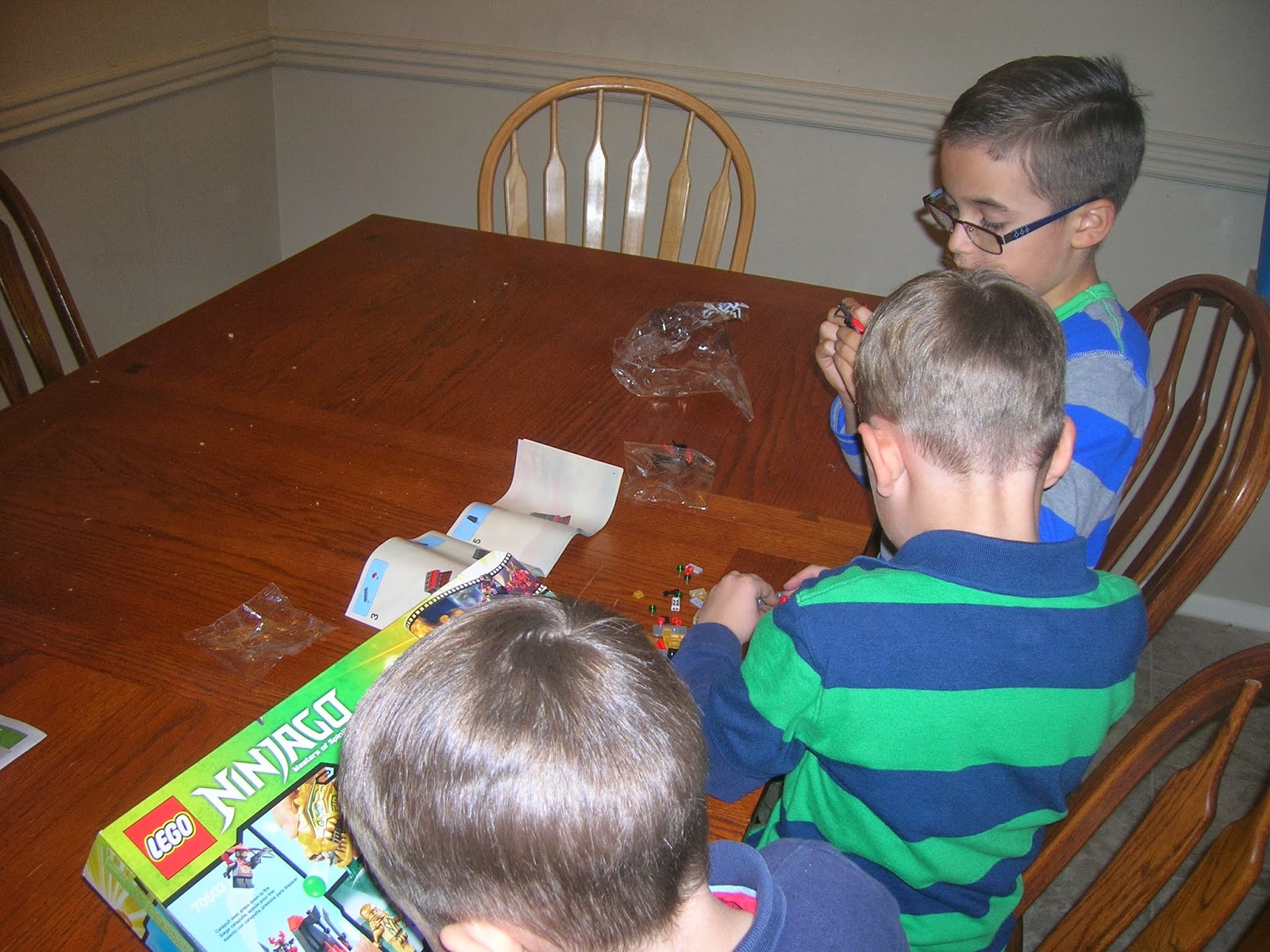 Just look at that big smile.  He was very excited to get a wizard's tower to go with his castle set. 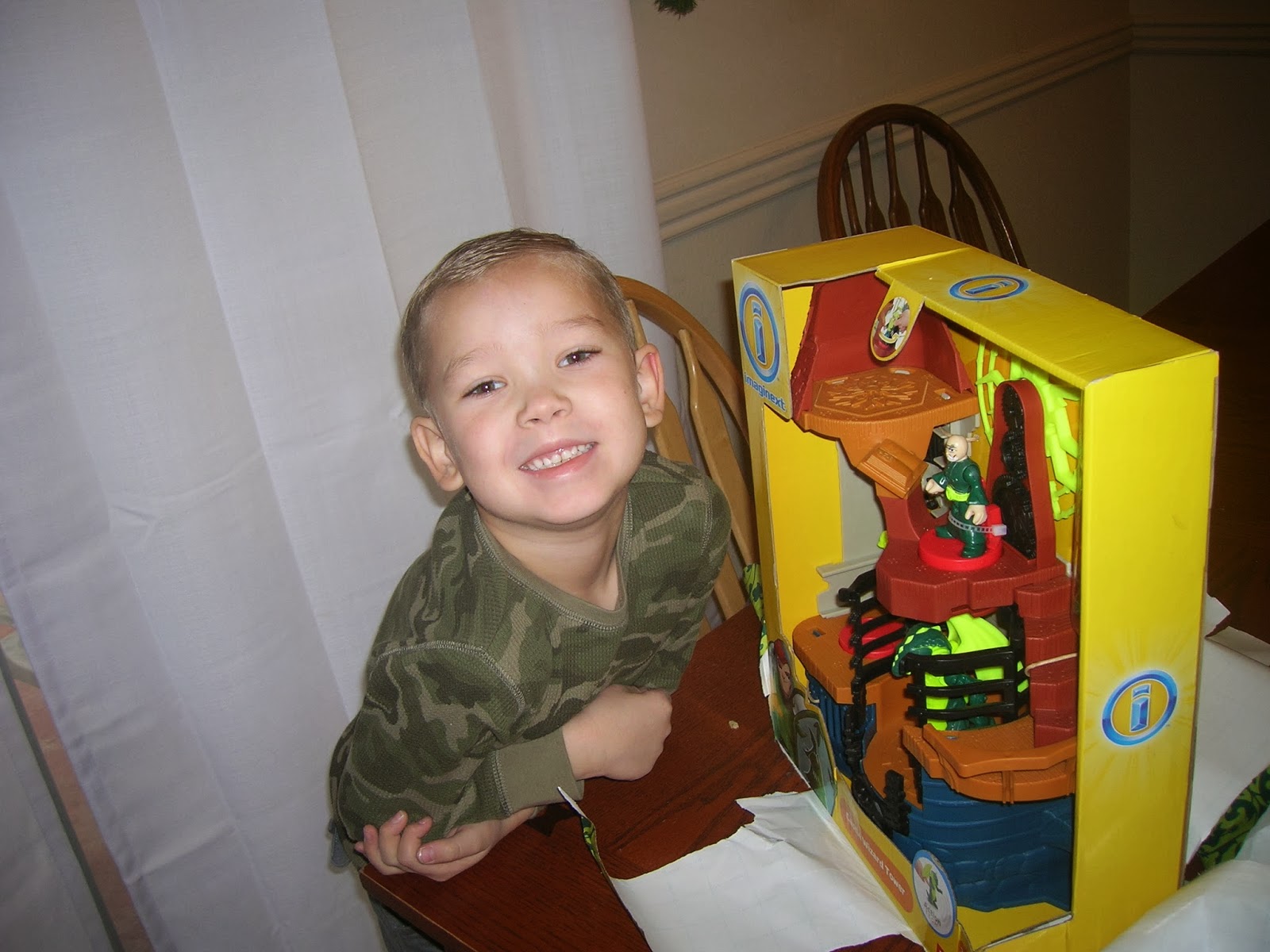 Mr. Two is not one for big crowds, or lots of activity.  I knew that for this to be a good party for him, it needed to be small and low key.  He only invited five friends, two of which could not make it, as well as his brothers.  That number was just right for him.  I kept the activities simple and let them spend time just playing in the yard for a good portion of the time.  That worked out well with this group.  I borrowed a few ideas from this super fun party at Delia Creates.

For his party, I filled the water table with water beads and an assortment of plastic ocean animals and colored gems.  It was a good open-ended, easy activity to start with.  This was a big hit at the party, especially with Mr. Four! 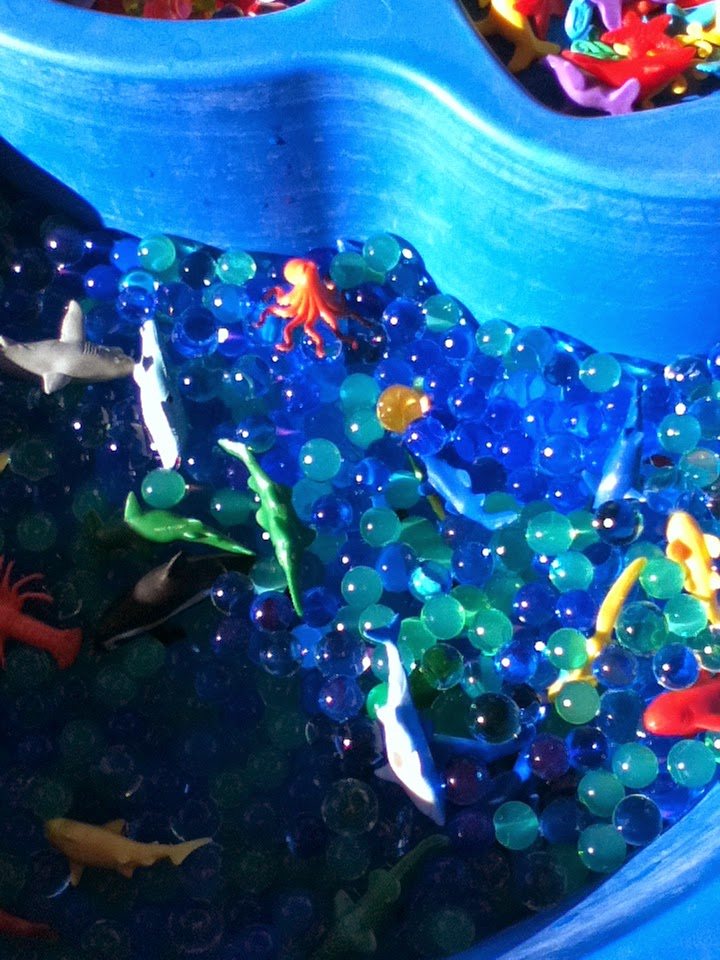 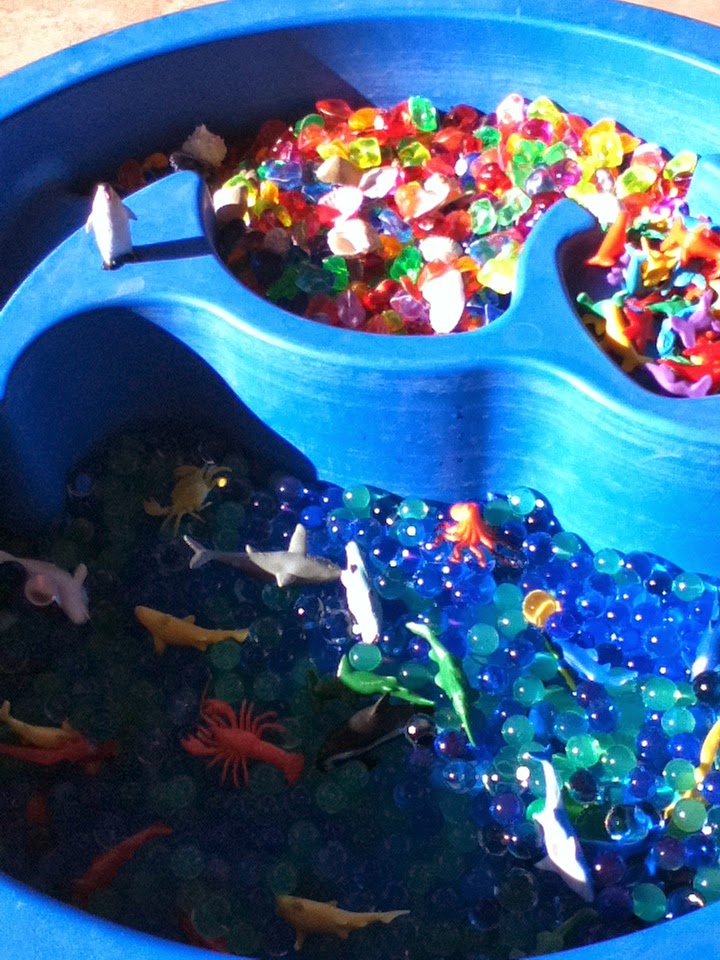 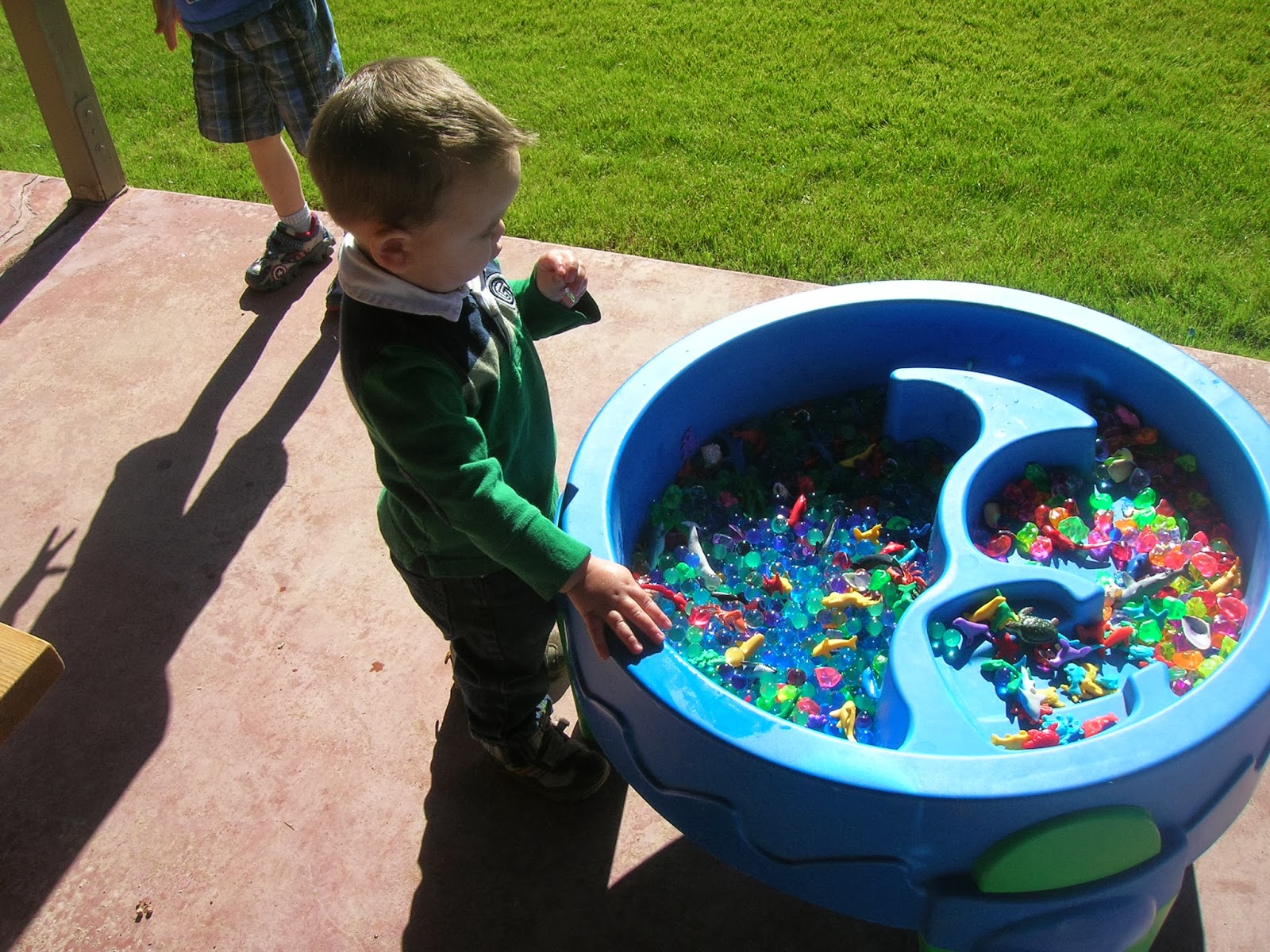 We made ocean "snow" globes for part of the activities, as well as a take home favor.  The boys loved choosing their animals and shells, then adding the glitter.  Mr. Two and Mr. Three had lots of fun playing in the colored water afterwards as well... 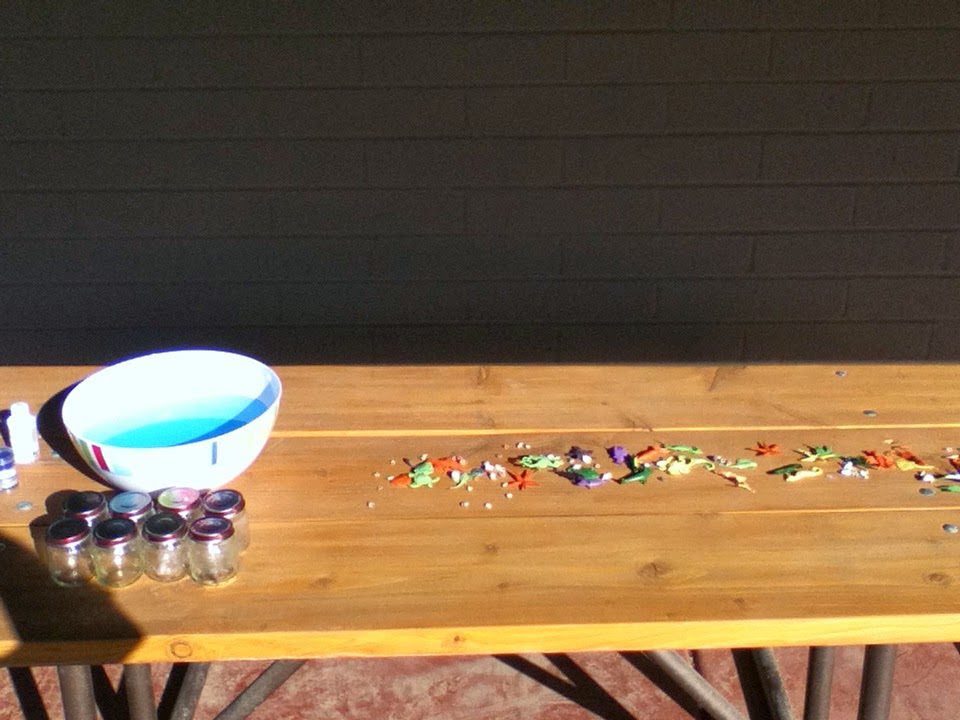 We played "Don't Eat Pete" with the ocean animal printable from the Delia Creates party.  The boys loved that! 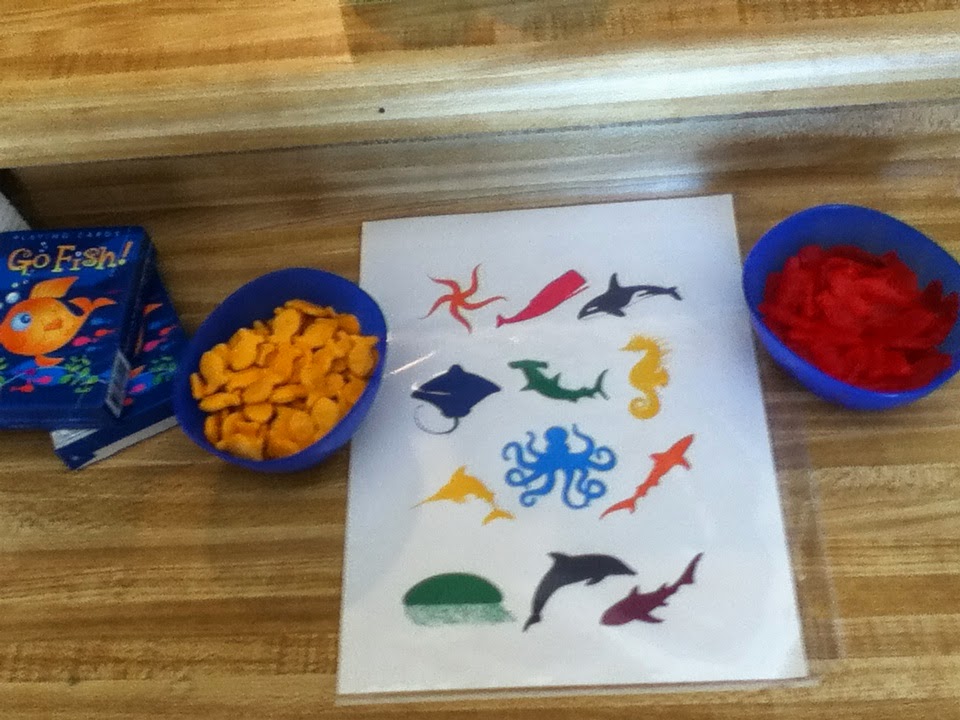 Another birthday request was that Uncle Zach come to his party.  Zach was so sweet to come and play a round or two of Go Fish with the boys and enjoy some cake.  It really made the party special for Mr. Two. 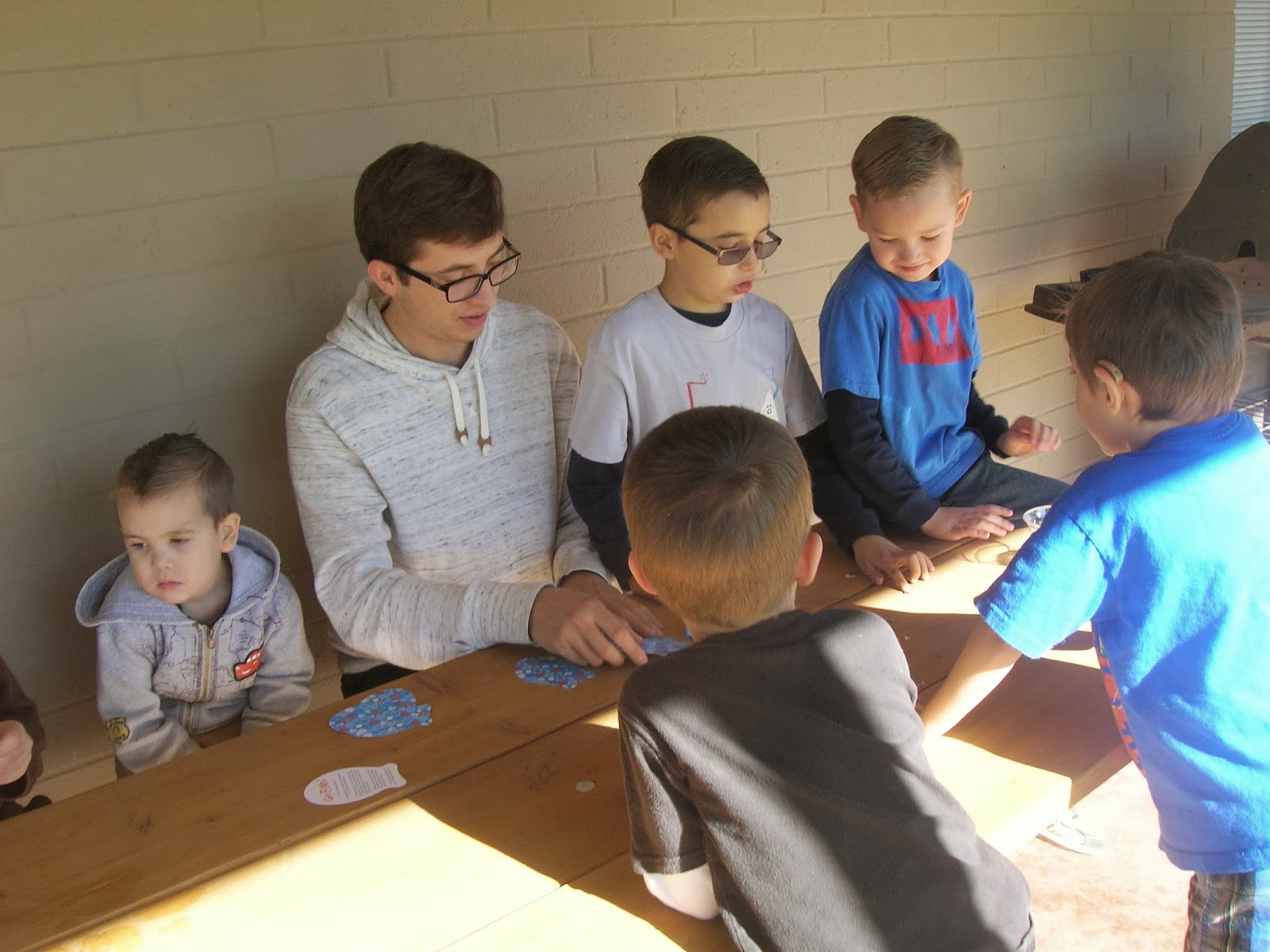 Here he is blowing out the candles on his fish cake!  This year I added chocolate rocks ("aquarium gravel") to the cake, along with the graham cracker goldfish and the fruit roll up seaweed.  Such a fun cake! 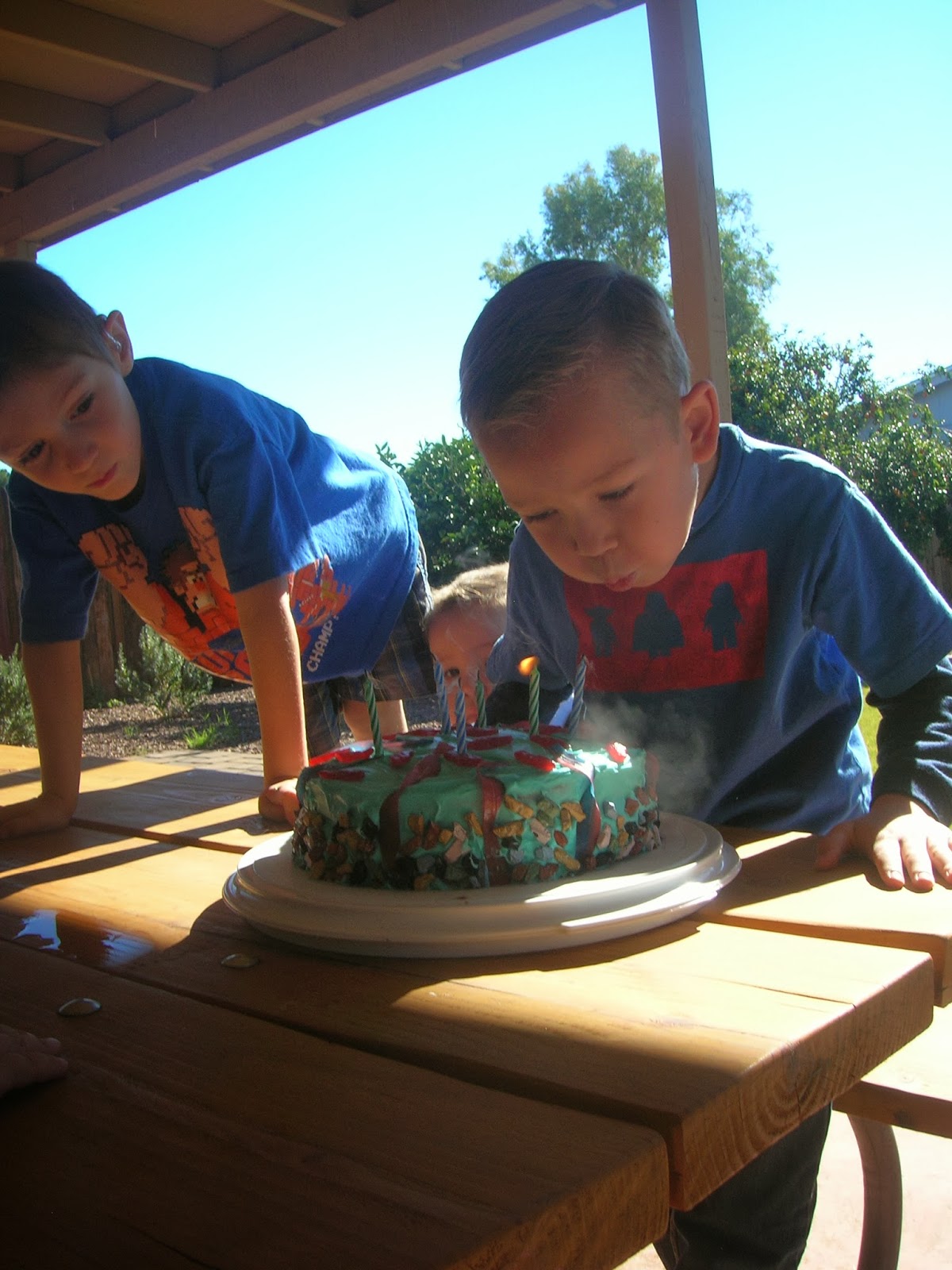 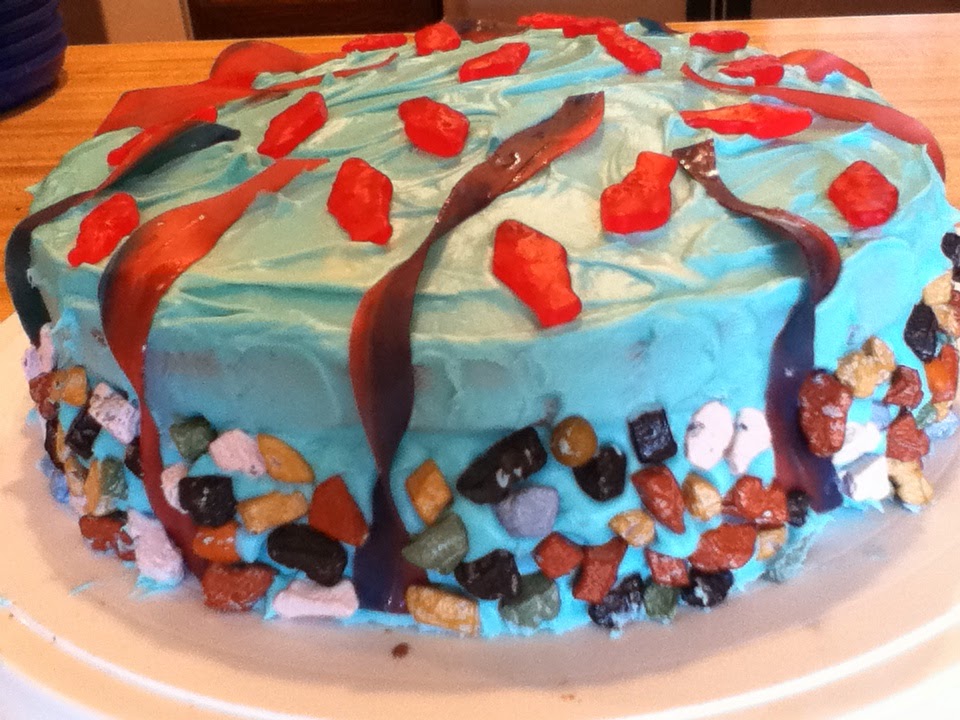 We also had jello oceans along with the cake, with gummy sharks swimming inside. 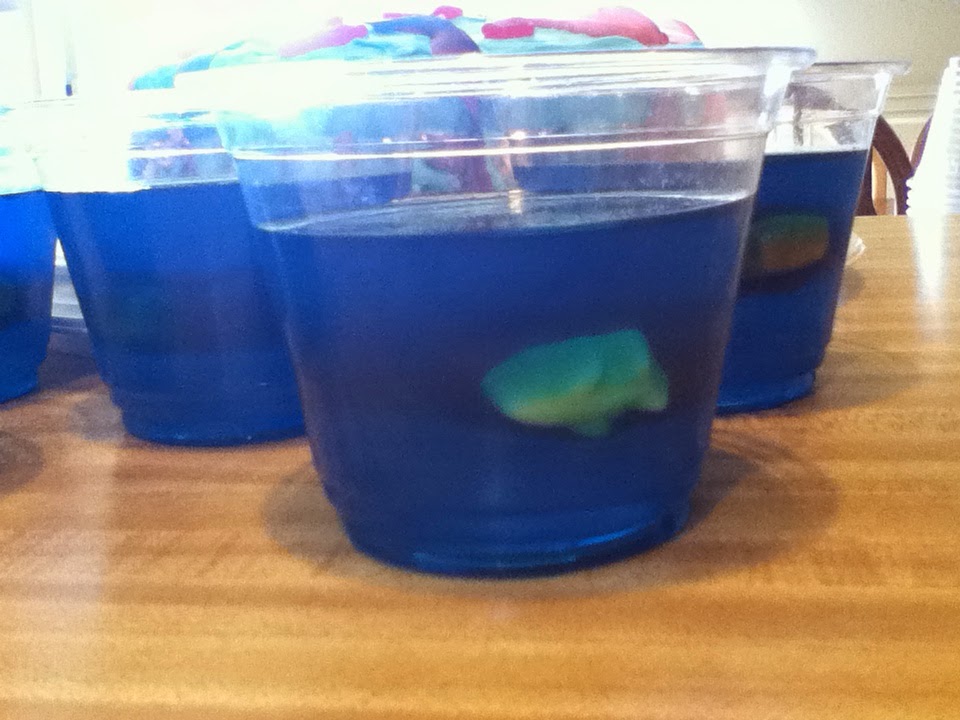 Opening presents with his friends.  I cannot say how wonderful it is to have a nice back yard with a big covered porch right now!  The weather was so nice and it was so much better to have the party outside, with all these active little boys! 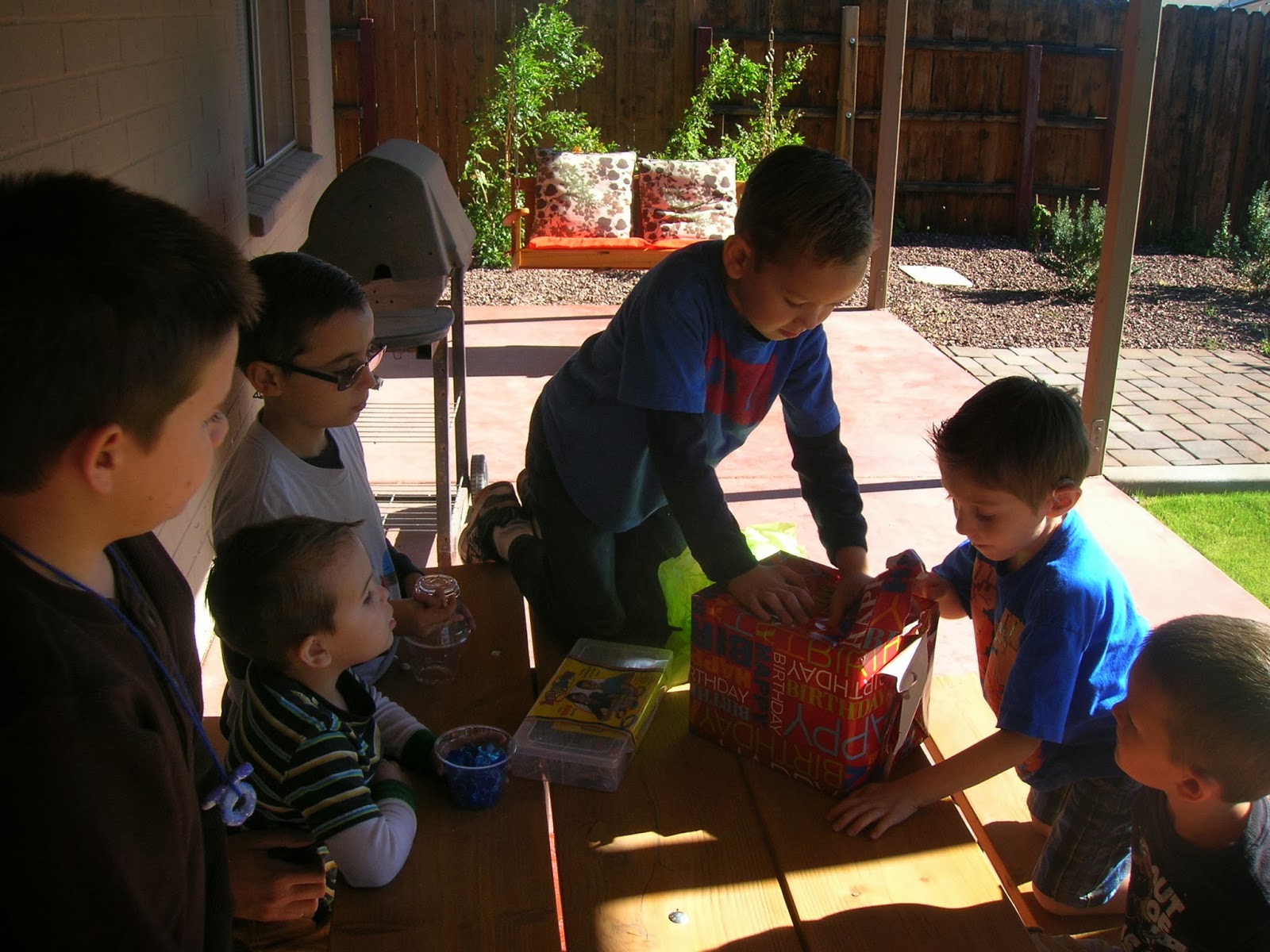 I sent the boys home with a little sand bucket and shovel, some chocolate fish, gummy fish, Goldfish crackers, and bubbles, along with their ocean globes. 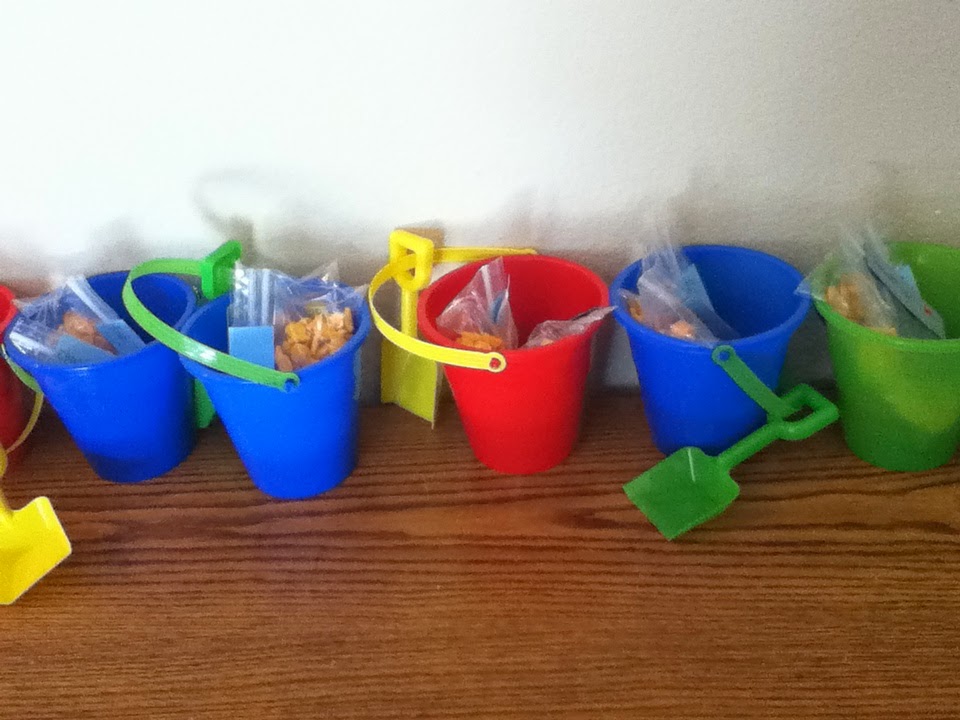 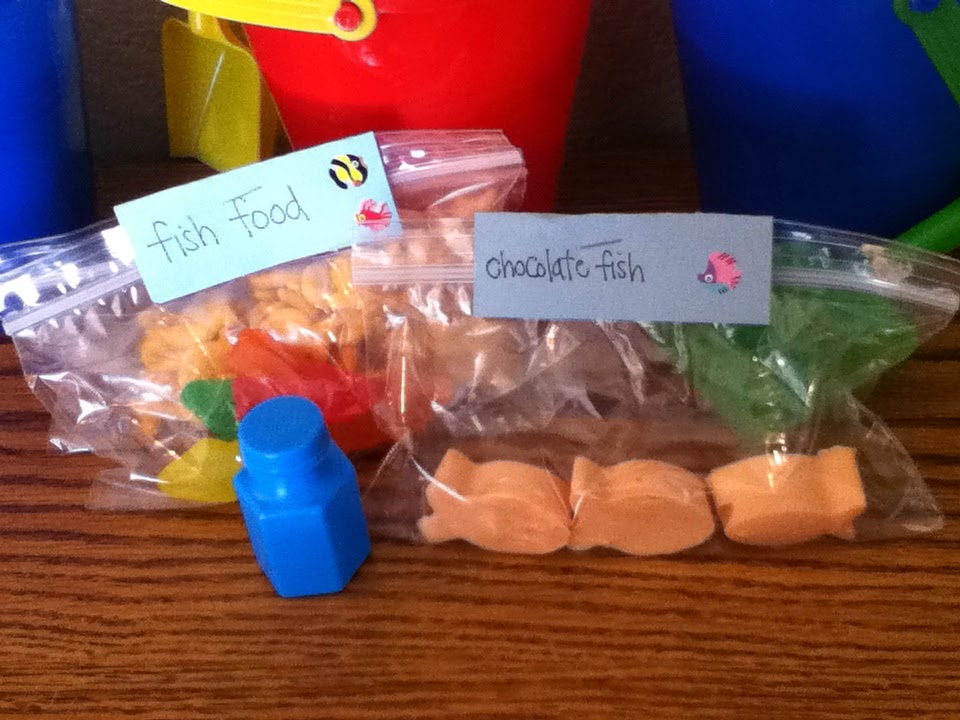 Happy Birthday, Mr. Two, my quiet, creative little boy.  I hope your birthday was as unique and fun as you are!
Posted by Diana at 8:46 PM 1 comment: