The Mr.'s decided to go with a theme again this year for Halloween costumes.  I was all too happy to oblige.  You know I can't resist matching people...

I was also a bit relieved that they wanted to do something other than Star Wars.  This year, it was all about the ninjas, Lego Ninjago Ninjas, to be exact. 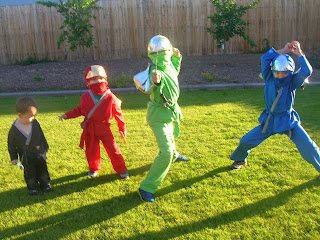 I drafted the patterns for their costumes using their jeans and a Sunday shirt as my pattern starters, and I have to say, they turned out pretty nice.  I used this tutorial for the pants, and just figured out the wrap top on my own.  I also made the shoulder armor and pinned them to the shirts so that the rest of the costume could be thrown in the wash.  Want to know the trick for the cool head covers?  All I did was buy a matching t shirt from the craft store and sewed the crest on the inside back of the tee, then you tie it on like this (scroll down the post for the picture how-to).  Super easy!  Thanks to our Kalanui cousins for tipping us off to this easy ninja mask trick a few years ago. 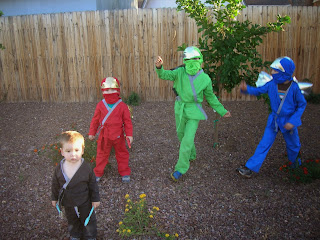 It was really hard to get a good pic of all of the boys standing together, they all wanted to pose with their sweet ninja moves and some of them just wanted to go dig in the dirt.  I think I got a few good shots, though. 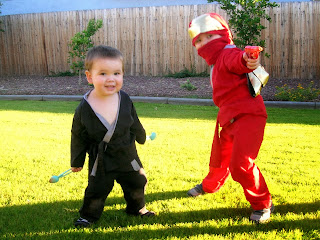 Who knew measuring spoons and squirt guns were ninja weapons of choice? 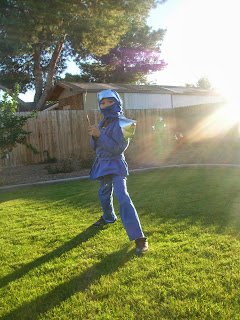 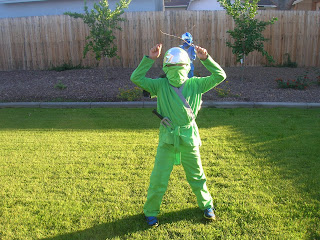 The Sunday before Halloween, we had our traditional spooky Halloween dinner with my family. 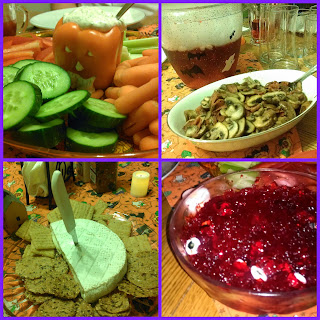 On the menu was pepperoni-fried mushrooms (not Halloweenish, but the mushroom lovers were so happy), monster fingers (chicken strips), ghost mashed potatoes, brie and crackers (the knife added a little Halloween element), red jello with candy eyes, veggies and dip in a jack-o-lantern bell pepper, and pumpkin cookies and eyeball pudding (tapioca) for dessert.  We had to have our kool-aid in our dry ice-filled cauldron as well.  I love themed holiday dinners.  It is a fun tradition that I hope we never stop doing. 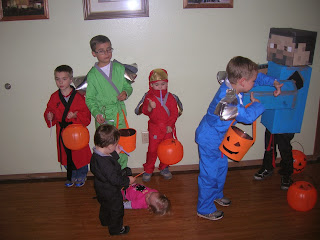 On Halloween night, we went trick or treating with my brother's three kiddos.  It was akin to herding cats to keep them together, let alone get them to stand still and look at the camera for a picture!  I think the action shot is quite fun, though.  It captures the real moment, you know, with two of them play fighting, one on the floor, one trying to run away...  We met up with all the family in town for pizza and candy, then down a few streets in my parents' neighborhood to trick or treat.  They had a blast. 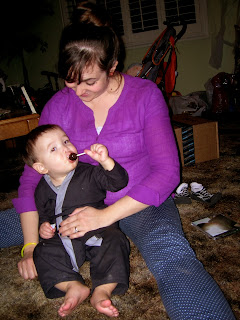 Mr. Four was happy to join in, as long as it involved having a sucker in his mouth for the festivities.  Who can say no to that face?  I don't even want to think about how many suckers he ate that night... 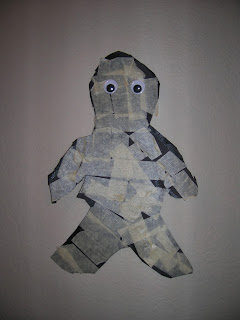 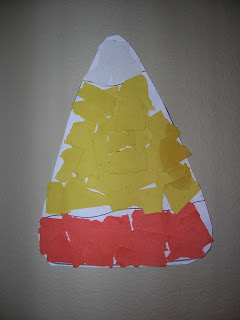 Just for fun, here are two art projects that Mr. Two made in school that I thought would be easy to make at home, too.  The mummy is made with masking tape.  Why didn't I think of that?!  So clever.

It was another memory-and-candy-filled Halloween.  Now, on to Thanksgiving trimmings, gratitude and some fun fall projects to finish up!