This year, I decided to make Mr. One and Mr. Two's Halloween costumes from scratch.  I bravely made my own patterns with what I had in their closets to make a bat/dragon (After choosing to be a black bat and having his costume finished, he decided he wanted to be Toothless from How to Train Your Dragon.  Luckily Toothless looks a lot like a black bat...) costume and a ghost costume.  Mr. Three wore Mr. One's baby spider costume from his first Halloween.  (Gotta love hand-me-downs!)  I have to say, this was challenging, but I am so happy with the end results. 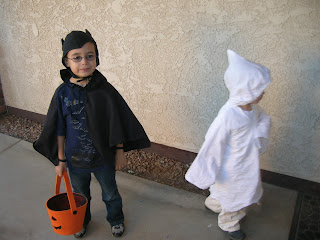 I finished both costumes a few weeks before Halloween, which was good for several reasons.  First, they were able to have fun wearing them for weeks instead of just one day.  Second, I quickly became involved in several projects by the end of October that took up a lot of time.  It was a blessing to have them done and not have to be up all night sewing.

We went to my parents' neighborhood carnival Wednesday night before Halloween with the boys.  Poor Mike was really sick with strep throat, so he couldn't come (sniff!!)  It was fun to be there with my parents and sisters for the evening.  Mr. One found the inflatable bouncy rooms and the fish pond with prizes and was a happy camper.  Mr. Two discovered the joys of cotton candy and was happy as well.  Mr. Three was just glad to be held all night.

Saturday night we had our church Halloween carnival and trunk or treat.  This is how Mr. One enjoyed the evening. 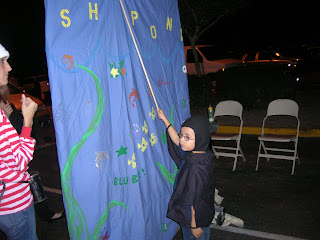 This is how Mr. Two and Mr. Three enjoyed the evening.  They slept through the whole carnival!  Mr. One promised to share his treats and prizes with his brother, so all was good. 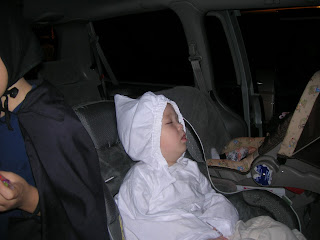 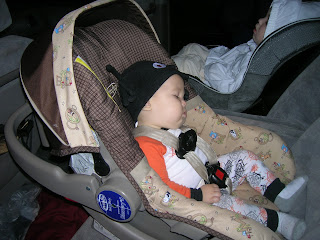 On Halloween night, we ate dinner with my mom's side of the family.  We let the boys dress up, but we didn't trick or treat.  It was nice to spend time eating and chatting with family.  It was a perfect night outside, so we ate out on the porch and let the boys run around in the grass. 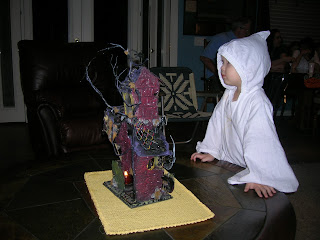 My aunt loves Halloween, so her decor didn't disappoint.  It was fun for the boys to look at all her decorations and we tried to snap a few cute pics of them together. 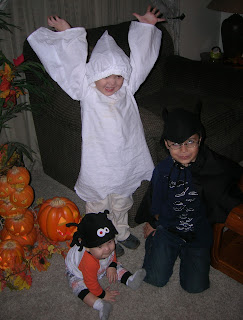 This is the only pic we got of the three of them that turned out.  Luckily, it's a pretty darn cute one!
Posted by Diana at 11:12 PM